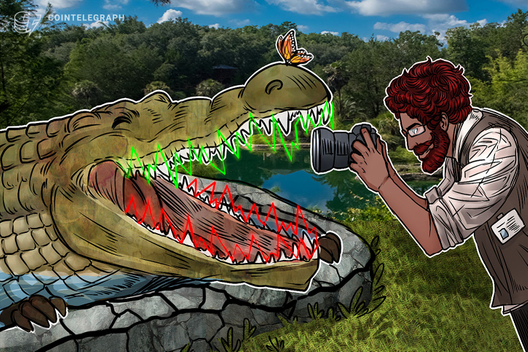 The price of Bitcoin hovers around the $8,800 price mark as the market is mostly trading sideways today.

Tuesday Nov. 12 — Cryptocurrency markets are largely trading sideways with many changes among the top-20 coins not exceeding 1% on the day.

Bitcoin (BTC) has been trading sideways for the better part of the day and continues to circle the $8,800 price mark. The world’s largest cryptocurrency bounced off a local low of $8,705 earlier today before moving to its current trading price at around $8,750, showing a small gain of 0.27% on the day.

Bitcoin continues its struggle to hold on to its current trading levels, but traders, including Cointelegraph contributor Michaël van de Poppe, are starting to wonder whether  BTC could drop further to around $8,400.

Well-known crypto industry figure Bobby Lee, on the other hand, doesn’t fear BTC’s current price struggles, as he recently said that Bitcoin will eventually surpass the market cap of gold and could ultimately be worth a whopping $1 million.

Ether (ETH), meanwhile, is currently sitting at $186 per coin. The number one altcoin saw a small dip in sync with BTC to show a slight loss of around 0.1% at publishing time.

XRP, the third-largest coin by market capitalization, is currently trading at $0.271 per coin, down 1.44% at press time. The recent annual Swell conference, where CEO Brad Garlinghouse said that he doesn’t think about the price of XRP in the short term, has failed to trigger any positive price action for the coin.

Most of the top 20 coins are trading sideways, with many seeing movement of under 1% in either direction.

One of the only exceptions is NEO, which is showing an impressive gain of more than 10% in the last 24 hours, followed by Chainlink (Link), which is recording gains of 3.29% on the day.

Cosmos (ATOM), the number eighteen coin by market cap, took the biggest fall today with a loss of more than 4%.

The overall cryptocurrency market cap currently sits at $240 billion, with Bitcoin making up 66% of the total.