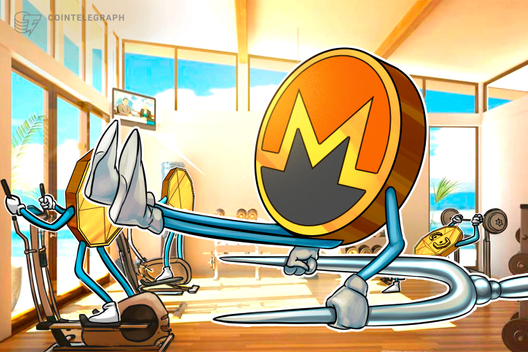 The Monero network has successfully upgraded to RandomX, a new mining algorithm that aims to be ASIC-resistant.

The Monero (XMR) network has been successfully upgraded to RandomX, a new mining algorithm that aims to be ASIC-resistant.

On Nov. 30, the Monero community workgroup did a live stream on YouTube in which the upgrade took place at around the 58 minute mark. The new upgrade also introduced proof-of-work (PoW) algorithm, RandomX, which uses random code execution together with memory-focussed techniques to be resistant to application-specific integrated circuits (ASIC) — devices optimized for professional mining operations.

The upgrade is also reportedly optimized for general-purpose central processing units (CPU) in order to make the network more decentralized. As a result, those who wish to use graphics processing units (GPU) to mine Monero might find it more difficult to do so.

The Monero team believes that ASIC machines have a centralizing effect as there are only a few companies in the world that are able to manufacture them.

However, others have claimed the exact opposite. Bran Cohen, best known as author of the peer-to-peer (P2P) BitTorrent protocol, recently said that ASIC-resistant PoW is both a pipe dream and a bad idea. Cohen added that it is a much better idea to be ASIC-friendly, because “ASIC resistance just creates more centralization around manufacture when it inevitably fails.”

Ethereum co-founder Vitalik Buterin echoed similar sentiments when he said that there is a growing consensus that ASIC-resistant algorithms have a limited lifespan and ASIC resistance ultimately makes 51% attacks cheaper.

Poland-based cryptocurrency exchange BitBay announced in November that it will delist the privacy-centric cryptocurrency Monero on Feb. 19, 2020 due to money laundering concerns. The exchange explained:

“Monero (XMR) can selectively utilize anonymity features among projects. This feature of XMR is a subject to end of transaction support. The decision was made to block the possibility of money laundering and inflow from external networks.”

In September, major cryptocurrency exchange OKEx also delisted Monero and a slew of other privacy-oriented coins including Dash (DASH), and Zcash (ZEC), among others.